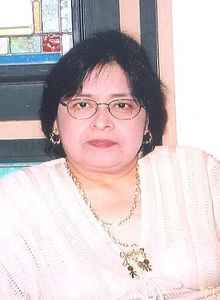 Yolanda "Yoli" Elisa Alamina, 66 of Searcy, Arkansas was called to her eternal home with the Lord on Friday, November 27, 2015. Yolanda was born on June 26, 1949 to Felix Cruz and Epifania (Gomez) Cruz. Yolanda had a very adventurous childhood, and cherished the times spent with her brothers and sisters in the small, care-free, rural town of Santa Elena. After the untimely and unexpected death of her father, Yolanda moved to the great big Belize City, where she began working at James Brodie & Company. It was here that she met the most persistent Caye "bwai", and so began the most wonderful love story. She married the love of her life, Efren Devero Alamina on February 10, 1967. Yolanda devoted all her time, energy and attention to creating a happy, comfortable, and love-filled home for her husband and her four children, all of whom she loved so very dearly. And when God blessed her with grandchildren, they became her inspiration to continue to fight the good fight.
Yolanda was preceded in death by her brother, Joaquin Cruz, her father, Felix Cruz; her sister, Hortencia Gonzalez, her brother Calix Cruz, and two nephews Jose Miguel Gonzalez and Leroy O'Brien. Yolanda is survived by her loving and devoted husband Efren, her son Ismael and wife Charla and their three children Ismael, Jr., Sheree and Xavier, her daughter Patricia and husband Gene Salman and their three children, Andrew, Nicole and Joshua, her daughter Lisa Alamina, and her son Efren and wife Julianna and their two children, Jordan and Natalia. Yolanda is also survived by her mother, Epifania Cruz, her sisters, Aurora Ramirez, Aurelia Cruz, Romelia O'Brien, and her brother, Clemente Cruz and wife Betty. She is survived by many nieces and nephews, cousins, grand nieces and grand nephews.
In 2005, when Yolanda needed a kidney transplant, her niece, Marcia Byer generously and without hesitation gave her the gift of life. Thanks to Marcia's unselfish act of kindness, Yolanda was blessed with more than ten precious years, which gave her the opportunity to get to know all of her grandchildren. Yolanda and all of us are forever grateful to Marcia and will never be able to thank her enough.
Yolanda will be missed dearly, for all the love she gave so generously, for the timely words of encouragement she offered, for all the sound advice she gave that guided us on the right paths, for the many "creative" stories and historical anecdotes, for the delicious meals she prepared (if you only hinted that you were craving such and such, you could count on it being prepared for you ASAP), for her green thumb which produced a bounty of fruits, vegetables, roses and flowers, for being a best friend to many, for being the epitome of a great wife, mother and grandmother, for always being optimistic during her long and hard fought battle, for her courage, her devotion, her undying faith and for the love, laughter, and light she brought to us each and every day.

Funeral Services will be held on Friday, December 11th at 2:30pm at the St. Ignatius Catholic Church in Santa Elena, Cayo District, Belize.

To order memorial trees or send flowers to the family in memory of Yolanda Elisa Alamina, please visit our flower store.