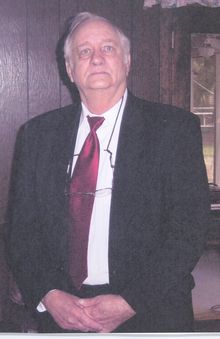 William Foster (Bill) Norman, 72, of Searcy, died March 2, 2013 at White County Medical Center. He was born June 22, 1941 in Newport, Arkansas to the late Forrest Foster and Merle Johnson Norman.
Bill owned Norman's Mapping Company until his retirement. He was a member of Temple Baptist Church in Searcy; He loved his church, but most of all he loved his family. Even in his demise, he continues to give, as he was an organ donor. After graduating from Newport High School, Bill went on to attend ASU in Jonesboro, and then serve our country in the U.S. Navy. He was an avid deer hunter and was a member of Brown Creek Hunting Club.
In addition to his parents, Bill was preceded in death by a baby boy, Timothy Shane Norman.
He is survived by his loving wife of 40 years, Barbara Fuller Norman of the home; one son, William Brian Norman (Laura); one daughter, Alys Ann Carmichael (Houston Wayne) of Searcy; one brother, Forrest Norman (Billie Lee) of Pinellas Park, Florida; one sister, Rosa Norman Pugh of Searcy; two granddaughters, Jordyn Nichole Bee and Hannah Lorraine Norman; two step granddaughters, Sydney Carmichael and Jordyn Clift; one aunt, Opal Johnson Nelson Gennins; five nieces, many cousins and numerous friends.
A Memorial service will be 9:30 a.m. Monday, March 4, 2013 at Searcy-McEuen Funeral Home.
In lieu of flowers, please make lasting memorials to Arkansas Children's Hospital.

To order memorial trees or send flowers to the family in memory of William Foster Norman, please visit our flower store.