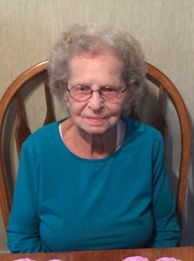 Wilda Mae Wyatt, 98, of Pangburn, went to be with the Lord, Thursday, October 20th at Unity Health in Searcy. She was born March 11, 1918 in Harmony Community to the late Otha K. and Beulah (Heggie) Roberson. She was a member of Pangburn First United Methodist Church.

In addition to her parents Wilda was preceded in death by her husband, Linza Wyatt; two infant sons, Terry Lane and Randy Lynn; four brothers, and one sister.

To order memorial trees or send flowers to the family in memory of Wilda Mae Wyatt, please visit our flower store.