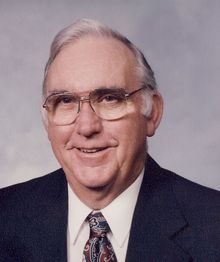 Wendell G. Pettus, 86, of Searcy, passed away Tuesday, September 9, 2014. He was born in 1928 to the late Walter Festus Pettus and Violet Barger of Rose Bud.

In addition to his parents he was preceded in death by his wife, Hettie Pettus; two brothers, Walter Pettus and Marion Pettus; and one grandchild, Jason Hughes.

He was a charter member of the Chapel Lane Freewill Baptist Church. "Pop" was a great, hard working, God fearing man. He was so kind and generous and always had a smile for everyone and a song in his heart.

All funeral arrangements have been entrusted to Searcy-McEuen Funeral Home.

To order memorial trees or send flowers to the family in memory of Wendell G Pettus, please visit our flower store.