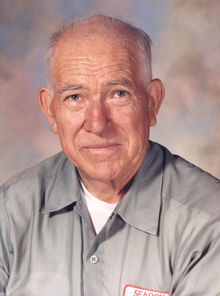 Thelton "Fred" Collins, 91, of Searcy passed away Thursday, March 6, 2014 at White County Medical Center. He was born November 16, 1922 in Center Hill, Arkansas to the late Robert Lee Collins and Fannie Blyeth Collins.
He was a member of West Race Baptist Church. He was a U.S Army war veteran who served during WWII in the Philippines and Japan. He loved to knit especially afghans and house shoes. He was an expert at small engine repair. He enjoyed gardening, fishing and just being outdoors. He liked taking walks and socializing during his walks. He was a loving husband, father, grandfather, uncle and friend who will be dearly missed.
He is survived by two sons, Barry Collins (Patsy) of Searcy, Scott Collins (Gaila) of Portland, Oregon; two daughters, Barbara Collins (Vic) of Searcy, Ellen Garrison (Vern) of Gresham, Oregon; one brother, William "Bill" Sullivan (Joyce) of Belen, New Mexico; nine grandchildren, thirteen great grandchildren and one great-great grandchild, six nephews, eight nieces and a host of loved ones.
In addition to his parents he was preceded in death by his wife of 58 years, Williemae Helen Collins; three sisters, Verna Collins, Lucille Abram and Elvie Brandon; two brothers, Jim and Bowdery Collins, and one grandson, Michael Stephen Collins.

Visitation will be from 4-6 p.m. Sunday, March 9, 2014 at Searcy-McEuen Funeral Home. Funeral services are 10:00 a.m. Monday, March 10, 2014 in the funeral home chapel with interment following at Roosevelt Cemetery.
Share a Memory: www.SearcyMcEuenFuneralHome.com

To order memorial trees or send flowers to the family in memory of Thelton Fred Collins, please visit our flower store.