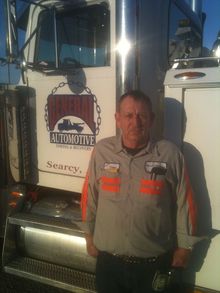 Steve Anglin, 64, of Judsonia, passed away Friday, May 1, 2015. He was born November 19, 1950, in Rockford, Illinois, to Al and Rosey Anglin. Steve was the oldest of three children. In 1968, he graduated from Piggott High School. In 1969 he enlisted in the Air Force and served for a total of 41 years, including a tour in Vietnam from 1971-1972. He and his father started General Automotive Service in 1979 in Heber Springs, Arkansas. In 1984, Steve moved the business to Searcy operating an auto body repair and towing service. After selling the auto body repair shop in 1993, he devoted his life to the towing and recovery industry becoming a mentor to others. As an active member of the community he was well liked and highly respected by everyone that knew him.

He is preceded in death by his wife of 36 years, Cindy Anglin. They were married on September 1, 1973. During their life together, they raised one son Louis Anglin (Shaina) and two daughters Terri Chapman (Richard) and Lynn Baker, all of Judsonia. He was blessed with seven grandchildren: Stevie, Morgan, and Caitlin Anglin of Judsonia, Emily and Amelia Chapman of Judsonia, Nicole Mc Coy of Searcy, Michael Burriss of Knob Lick, Kentucky and one great-grand child, Conner McCoy of Searcy.

He is preceded in death by his parents Al and Rosey Anglin, grandparents Richard and Mary Ethridge and Morg and Aszlee Anglin.

To order memorial trees or send flowers to the family in memory of Steven Anglin, please visit our flower store.