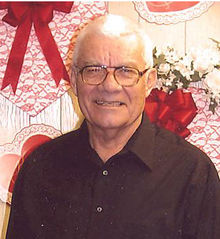 Samuel Eugene Moore, 88, of Searcy went to be with the Lord, Monday, September 9th at Searcy Health Care. He was born April 7, 1925 in Columbus, Georgia to the late Samuel Smith Moore and Nora McDonald Moore.

He was a member of Landmark Baptist Church where he was Pastor for 30 years until he retired. He was a Marine Corp Veteran who served in World War II. It was during the war that he received his call to preach, and his first sermon was on board ship where he preached to the fish of the sea. He served the Lord in ministering by preaching the Word of God for over 60 years.

He is survived by his wife of 66 years, Ruby J. Moore of McRae, Arkansas; one son, David Moore (Tiffany) of McRae; one daughter, Joy Jones of Pleasant Grove, Arkansas; two sisters, Annie Merle Bazemore of Opelika, Alabama and Joyce Woods of Florida; two grandchildren, Shannon Moore and Tamberlyn Moore.
In addition to his parents he was preceded in death by one brother, James Moore.

Visitation will be Tuesday, September 10th from 5-7 p.m. at Searcy-McEuen Funeral Home.

To order memorial trees or send flowers to the family in memory of Samuel Eugene Moore, please visit our flower store.