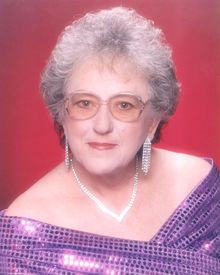 Ruth Irene Collins, 73, of West Point passed away Saturday, May 10, 2014 at White County Medical Center. She was born November 25, 1940 to the late Luther Edward Grissom and Maudie Purkiss Grissom in West Point, Arkansas.
She was of the Baptist Faith. She was a loving wife, mother, grandmother and great grandmother and was loved by all who knew her.

In addition to her parents she was preceded in death by one brother, Billy Grissom.

Visitation will be from 6-8 p.m. Tuesday, May 13, 2014 at Searcy-McEuen Funeral Home. Funeral services are 10:00 a.m. Wednesday, May 14, 2014 in the funeral home chapel with interment following at West Point Cemetery.

To order memorial trees or send flowers to the family in memory of Ruth Irene Collins, please visit our flower store.