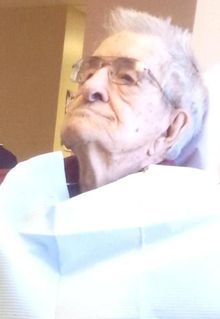 Peter William Georgopoulos, 91, of Pangburn passed away Thursday, October 20th at his home. He was born March 27, 1925 in Boston, Massachusetts to the late Varsilios and Ethel (Anderson) Georgopoulos.

Peter was a United States Coast Guard Veteran. He was of the Baptist Faith. Peter was a loving father, grandfather, great grandfather, and friend who was loved by all who knew him. He will be dearly missed.

In addition to his parents, Peter was preceded in death by his wife, Shirley Ann Georgopoulos.

Visitation will be from 6:00-8:00 p.m. Wednesday, October 26th at Searcy-McEuen Funeral Home.
Graveside services will be held at 2:00 p.m. Thursday, October 27th at Walnut Grove Cemetery in Pangburn with Bro. Keith Alexander officiating.

To order memorial trees or send flowers to the family in memory of Peter William Georgopoulos, please visit our flower store.