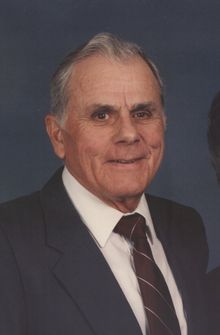 O.C. Baker Jr., 84, of Searcy, died Monday, April 16, 2012. He was born in Pangburn, Arkansas, to Oran and Myrtle Garner Baker on July 14, 1927.
He married Betty Jo Crosby Baker on June 18, 1943, and she preceded him in death on November 27, 2010. After their marriage, O.C. and Betty managed a small cafAC. in Pangburn while still in high school, and later moved to Michigan to work in the auto industry. While in Michigan, twin sons, Ronnie and Donnie were born. After moving back to Searcy in 1958, the couple was blessed with a third son, Kevin.
In Searcy, O.C. managed both a Citgo and a Phillips 66 service station, and later was employed by Maytag. He was an active member of the Searcy Jaycees and a member of the Westside Church of Christ.
In addition to his parents and wife, he was preceded in death by one sister, Mildred Gray.
Left to cherish his memory is his children, Ron Baker and wife Janyth of Searcy, Donnie Baker and wife Rena of Clarksville, Kevin Baker and wife Janice of Louisville, Kentucky; one sister, Angelee Wise of Pangburn; and one brother, Howard Baker and wife Nola of Pangburn. He also leaves seven grandchildren and fourteen great-grandchildren.
Visiting hours will be 6-7:30 p.m. Thursday, April 19, at Searcy-McEuen Funeral Home. Funeral services will be held 10:00 a.m. Friday, April 20 in the Searcy-McEuen Funeral Home Chapel. Interment will follow at Oak Grove Cemetery under the direction of Searcy-McEuen Funeral Home.

To order memorial trees or send flowers to the family in memory of O.C. Baker, please visit our flower store.