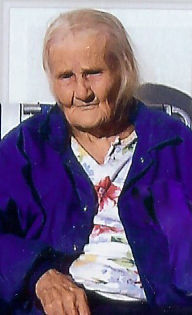 Nona Fay Swain, 93, of Kensett went to be with the Lord, August 9, 2012 at Oakdale Nursing Home in Judsonia. She was born September 26, 1918 in Seymore, Missouri to the late Andrew Jackson William and Mary Ellen Becker William.

In addition to her parents she is preceded in death by her husband, Hershel Edward Swain. Also preceding her is one son, Kola Octave, one brother, Richard Williams, and two sisters Oma Hines and Thelma Doty.

Visiting hours will be 6-8 p.m. Sunday, August 12, 2012 at Searcy-McEuen Funeral Home. Funeral services will be conducted at 10:00 a.m. Monday at the Kensett First Baptist Church with burial following at West Point Cemetery

To order memorial trees or send flowers to the family in memory of Nona Fay Swain, please visit our flower store.