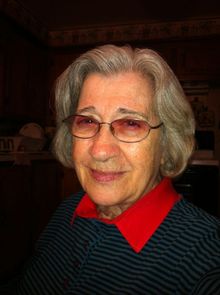 Myrtle "Vernell" Weir Moats, age 87 went home to be with her Lord and Savior on Sunday, August 18, 2013 at White County Medical Center with Pneumonia. Her family and friends had the honor of being in her presence when she went home to be with her Lord.
She was born November 28, 1925 at Coppers Springs Community of Arkansas to the late Ed Weir and Nellie Spencer of Coppers Springs, Arkansas.

In addition to her parents she was preceded in death by her husband of 69 years, William J. Moats; one son, Edwin Wade Moats; one step-grandson, Matthew Guy Billings.

She is survived by one son, Terry Lynn Moats and wife Kim of Searcy; one granddaughter, Leslie J. Kellems and husband Troy of Judsonia; two grandsons, Cody L. Moats of Searcy and Jessie Billings of West Point and several close family friends. She was a loving wife, mother, grandmother, great grandmother and a friend of many. She will be missed greatly by all who had the privilege of knowing her.

She was a member of Trinity Pentecostal Church of God in Higginson, Arkansas where she worshipped her Lord and Savior Jesus Christ very faithfully. Her life was centered around her strong love of Jesus, her family and friends and her love of gospel music.

Visitation will be Tuesday, August 20th from 6-8 p.m. at Searcy-McEuen Funeral Home.

To order memorial trees or send flowers to the family in memory of Myrtle Vernell Moats, please visit our flower store.