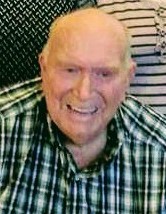 Morris Franklin Hodges, 88, passed way Monday, October 29th.  He was born in Griffithville, AR to the late Bennie and Marie Hodges on October 31, 1929.

Morris loved dancing, westerns, fishing, traveling, camping, auctions, and fixing cars.  He was known as a great story teller and professional napper. He was a hard worker and an honest God fearing man.  He will be missed by all who knew and loved him.

In addition to his parents he is preceded in death by his previous wife of forty-three years; Gay Hodges, and by his later wife of fifteen years; Evelyn Blake Hodges, one son; Michael Hodges, two daughters; Julia Walters and Marcia Hodges, one sister; Beatrice Brimer.

To order memorial trees or send flowers to the family in memory of Morris Franklin Hodges, please visit our flower store.