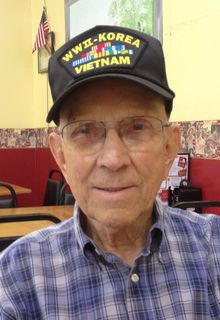 He was a veteran of World War II, Korean Conflict, and the Vietnam War. He was a loving husband, father, grandfather and loved his family above all. He was loved by all who knew him and will be greatly missed.
He is survived by his wife, Helen McFadden Frost of Kensett; one son, Ronald E. Frost (Laura) of Columbia, Missouri; three daughters, Donna M. Bethune of San Angelo, Texas, Denise G. Roop (Phil) of Cape Girardeau, Missouri, and JoAnn Landers (Walt) of San Angelo, Texas; one brother, Roy Frost of Washington, Michigan; one sister, Shirley Aalbertsberg of Romeo, Michigan; ten grandchildren, Lane, Mitchell, Jared, Erica, Sabra, Megan, Lindsey, Joshua, Jonah, and Sarah; three great grandchildren, Joscelyn, Fallon, and Colby.

A Memorial service will be held at 2:00 p.m. Monday, June 3, 2013 at Searcy-McEuen Funeral Home. In Lieu of flowers memorials may be made to All 3 Wars Veterans Assoc. Inc. 14952 W. Wethersfield Road Surprise, Arizona 85379-5966 or Arkansas Hospice Foundation.

To order memorial trees or send flowers to the family in memory of Marshall Milton Frost, please visit our flower store.