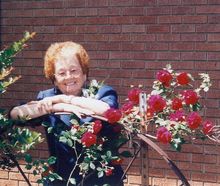 Mamie Evelyn Cole, 92, passed away Friday, December 14th at White County Medical Center. She was born near Carlisle on March 4, 1920 to the late Floyd Griggs and Nora Parker Griggs.

To order memorial trees or send flowers to the family in memory of Mamie Evelyn Cole, please visit our flower store.