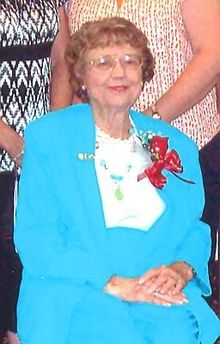 Mabel Marie Barnett, 94, of Kensett, went to be with the Lord and her beloved husband Glenn on December 16, 2012 at White County Medical Center. She was born March 5, 1918 in Garner, Arkansas to the late Biniom and Izetta McCallister Smith.

Mabel was a homemaker for most of her years, until the age of 60 when she became an Avon representative. After selling avon for 30 years, she retired at the age of 90.

In addition to her parents and husband of 66 years, she was preceded in death by her second mother, Lois Hicks Smith; three brothers, Weldon, Shirley, and Winford Smith; and one sister, Melva Dean Summers.

She is survived by one son Ronnie Barnett and wife MaryAnn; two grandsons, Robert and wife Jennifer, and John and wife Mary; four great-grandsons, Braxten, Austin, Jake, and Luke Barnett; and honorary grandchildren and great grandchildren, Danny Anitra, and Wyatt Sanders all of Heber Springs, and Johnna, Colby, and Saige Setzer of Guy, Arkansas; two brothers, J.C. Smith and wife Tressa, and Dale Smith and wife Carol both of McRae; four sisters, Alene Pennington and husband Ray of Sherwood, Nelda Myrick of Sherwood, Dorothy Jones of Searcy, and Juanez Brister and husband Tom of Beebe; as well as numerous nieces and nephews.

Friends and relatives may call from 5 until 8 p.m. Tuesday, December 18, 2012 at Searcy-McEuen Funeral Home. Funeral services will be conducted at 10:00 a.m. Wednesday, December 19 in the funeral Home chapel. Interment will follow at White County Memorial Gardens.

To order memorial trees or send flowers to the family in memory of Mabel Marie Barnett, please visit our flower store.