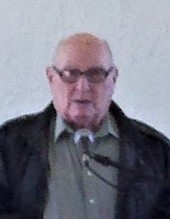 He was a pastor for forty years of the Church of God.  He was a talented and experienced carpenter.  He was a kind and loving husband, father, and grandfather.  He will be deeply missed by all who knew and loved him.

In addition to his parents he is preceded by his wife of sixty-nine years; Luella Meredith, one son; Bobby Meredith, two brothers; Willie and William Meredith, and one sister; Louise Webb.

To order memorial trees or send flowers to the family in memory of Louis Joe Meredith, please visit our flower store.