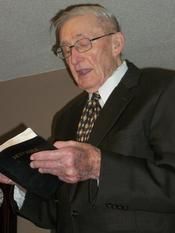 Rev. Julius Copeland of Malvern, Arkansas was born December 25, 1922 in Landis, Arkansas, the son of the late Thomas and Myrtle Ward Copeland. He was a Missionary Baptist minister for over 60 years. He pastored numerous churches all over Arkansas, and his greatest joy in life was sharing the good news of Jesus Christ with everyone he could. He was a member of Immanuel Baptist Church in Sheridan.
Julius died Monday, December 16, 2013 at HSC Medical Center in Malvern at the age of 90.
In addition to his parents, he was preceded in death by his wife, Dalphna Copeland who died, August 19, 2013.
Survivors include his daughter and son-in-law, Glenda and Tony Gray of Judsonia; sons and daughters-in-law, Roger and Jenny Beth Copeland of Texarkana, Gary and Janet Copeland of Malvern; grandchildren, Candice Johns, Blake Gray, Andrea Copeland, Kellie Winn, Amanda Bagby, Wesley Copeland, Grant Copeland, Justin Lindsey, Steven Lindsey; 5 great grandchildren.
There will be a visitation at Immanuel Baptist Church in Sheridan on Wednesday, from 6:00-7:30 P.M.. On Thursday, a visitation will be held at Searcy-McEuen Funeral Home chapel in Searcy, from 12:00 P.M. until service time. Funeral services will be at 1:00 P.M., following the visitation, with Dr. John Owen and Dr. Randy Cloud officiating. Burial will follow at Providence Cemetery near Judsonia. Pallbearers will be Grant Copeland, Wesley Copeland, Chad Winn, John Bagby, Glenn Passmore, Blake Gray.
In lieu of flowers, memorials may be made to the Missionary Baptist Seminary, 5224 Stagecoach Road, Little Rock, Arkansas 72204.

To order memorial trees or send flowers to the family in memory of Julius L. Copeland, please visit our flower store.