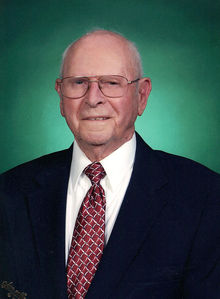 Joseph A. Sprenger, 97, of Marianna, Arkansas died April 2nd, 2012 at Forrest City Medical. Born August 3rd, 1914 in Illmo, Missouri, he was the son of the late Joseph Henry and Marie Sprenger.

He worked for the Inland Oil Barge Company as chief engineer for 21 years where he retired and moved to Stuttgart, Arkansas.

He was preceded in death by his parents, a brother, two sisters and his wife of 68 years Adina I. Sprenger in 2000.

He is survived by his son Robert J. Sprenger and wife Mary Edith of Las Vegas, Nevada; his daughter Arlene F. Allen and husband Tommy of Marianna, Arkansas, 8 grandchildren, 17 great-grandchildren, and 16 great-great grandchildren.

To order memorial trees or send flowers to the family in memory of Joseph A. Sprenger, please visit our flower store.