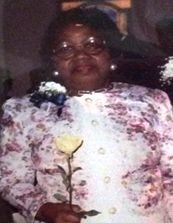 Sister Jennie Mae Dockens of Searcy, Arkansas left her earthly home to be with the Lord on Wednesday, January 25, 2017, after battling Alzheimer's for more than 18 years. She was 91 years old.

Jennie was born on February 7, 1925, to Mallie and Glen Smith in Searcy (Smyrna) Arkansas both who preceded her in death. She was the baby girl of the family. She had three brothers that also preceded her in death, C.T. Smith (Betty), Leon Smith (Marie), and L.C. Smith (Merle).
She attended the White County Training School in Searcy Arkansas. She was a hard working woman and held several jobs throughout her life. She retired from ITT Higbie Manufacturing Company where she worked as a welder making automobile parts.
Jennie was a mighty woman of God. She loved the Lord and loved her church (Saint Mary Christian Methodist Episcopal church) where she professed a hope in Christ at a very early age. She was a member of Stewardess Board number 2. She sang in the church choir, was a member of the Missionary Society and taught Sunday School. She dearly loved her students and enjoyed the responses and comments she got from her class.
Jennie married the love of her life Melvin T. Dockens, Sr. on June 23, 1960. To this union she had two daughters; Mallie Jones (Kenneth Wayne Jones, Sr.), and Nancy Dockens which preceded her in death. She also had two step children that she loved as her own. Sandra Faye Keyes who lives in Chicago Illinois and Melvin Dockens, Jr. who preceded her in death. She had two grandsons that were the light of her life; Kenneth Wayne Jones, Jr. and Gabriel Jones.
Jennie was a member of the Order of Eastern Star. She had a hobby of collecting angels. She was a marvelous cook. She canned vegetables from the garden her husband grew and she prepared everything from soul food to fine dining cuisine. She was always on the lookout for a good recipe and something new to try.
When she could no longer stay at home due to illness, she became a resident of Oakdale Nursing Center in Judsonia Arkansas on August 15, 2007. While there she enjoyed loving care from the staff of nurses and attendants. She thoroughly enjoyed the singing services and bible studies that were presented at the center. She additionally brought a lot of smiles and laughter to the other residents and those that cared for her.
For the last short days of her passing she received compassionate service from the staff at Summit Hospice. They helped to make her last days comfortable and her transition peaceful.
Jennie has finished her work on earth. We all know that because of her profession of faith in Christ that it has secured her a heavenly home with Jesus Christ. She is in no pain and has received her glorified body.
Jennie will be deeply missed by her friends, family and all who knew her.

Visitation will be Friday, February 3rd from 6:00-8:00 p.m. at Searcy McEuen Funeral Home.

Funeral Services will be held at St. Mary's CME on Saturday, February 4th starting at 12:00 p.m. with burial following at Gum Springs Cemetery.
All funeral services have been entrusted to Searcy McEuen Funeral Home.

To order memorial trees or send flowers to the family in memory of Jennie Mae Dockens, please visit our flower store.