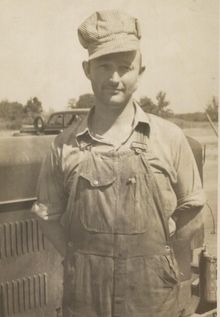 James Grady Spears, 95, of Searcy, died March 15, 2012 at Searcy Healthcare. He was born December 28, 1916 in Texarkana, Arkansas to the late W.C. and Nora Hicks Spears. In addition to his parents, he was preceded in death by two wives, Lois Bullard Spears and Violet Stephens Spears; three brothers, Cliff, Willie, and Jack Spears; one sister, Lois Moore; and stepson, Leo Gammon.

Mr. Spears was a craftsman and machinist by trade and began his career at the age of twelve working along side his dad and older brother. Prior to retiring, he spent twelve years teaching his trade at the Robert E. Lee High School at Baytown, Texas. He was a lifelong member of the Church of Christ most recently at College Church in Searcy.

He is survived by one son, Shannon Spears and wife Wanda of Searcy; daughter in law, Gloria Gammon; five grandchildren and their spouses, Marty and Glenda Spears, Angela and Jimmy Shaw, Stephen and Toni Spears, Dena and Brett Arosell, and Trae Gammon; ten great grandchildren; and dear friend, Ed Haberman.

The interment service will be 2:00 p.m. Tuesday, March 20 in the State Line Cemetery in Texarkana, Arkansas directed by Searcy-McEuen Funeral Home.

In lieu of flowers, make donations to Searcy Children's Home.

To order memorial trees or send flowers to the family in memory of James Grady Spears, please visit our flower store.