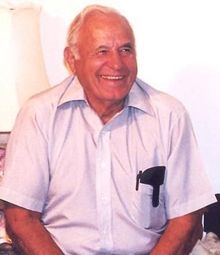 Jim gave his life to the Lord on Christmas Day, during the 1970's. Jim worked as a master roofer in Alaska and California and was an avid outdoorsman. He was a decorated U.S. Navy Veteran of WWII, and received numerous medals including the Asiatic Pacific Campaign Medal with four Bronze medals

He was preceded in death by one brother; Bill Lane Lambert; and three sisters, Lois Danels, Mavis Dale and Juanita Kiepert.

The family wishes to thank Dr. C.E. Ransom Jr., and Dr. Leon Blue and their staff, as well as Summit Hospice and the Kensett first responders for the excellent care they provided to Jim.

A private burial will be held at a later date in his beloved Anchorage, Alaska. In lieu of flowers, Memorials may be made to the Veteran's Outreach Ministry, 509 North Main Street, Searcy, Arkansas 72143.

All cremation arrangements have been entrusted to Searcy-McEuen Funeral Home.
Share a Memory: www.SearcyMcEuenFuneralHome.com

To order memorial trees or send flowers to the family in memory of James "Brownie" Lambert, please visit our flower store.