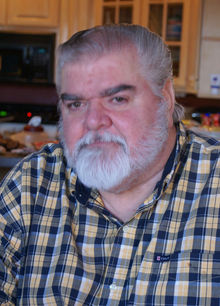 George Kenneth Clary Jr., 65, of Searcy passed away Monday, February 2nd at the VA Hospital in Little Rock. He was born June 28, 1949 in Fort Sill, Oklahoma to the late George Sr. and Ruby Clary.
Left to cherish his memory is his wife, Janelle Clary; two sons, Robert Clary (Sharon) of Judsonia, and Jason Clary of Little Rock; two daughters, Tracy Donnell (Dale) of Searcy, and Brooke Poole (Dusty) of Soldotna, Alaska; one brother, Bruce Clary of Oklahoma; thirteen grandchildren and three great grandchildren. He was a loving husband, father, grandfather, and friend who will be dearly missed.
In addition to his parents he was preceded in death by one brother, Roger Clary; and one sister, Joniece Blackburn.

To order memorial trees or send flowers to the family in memory of George Kenneth Clary, please visit our flower store.