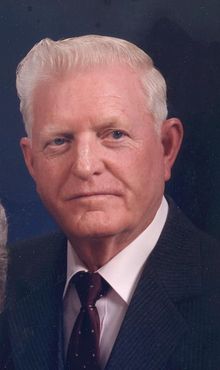 George Robert Bell, 90, of Kensett, passed from this life Saturday, February 15, 2014 at his residence. He was born July 21, 1923 in Georgetown to the late George Graham and Kazan Elizabeth Starkey Bell.
Mr. Bell was a member of The Church of God in Bald Knob. He served in the Anti-Aircraft Division of the Army during WWII. After leaving the military, he came back to Arkansas and farmed in Georgetown. He later moved to Eugene, Oregon and for the next 30 years he worked in the lumber industry as a press operator.
In addition to his parents he was preceded in death by two brothers and four sisters.
He leaves to this world a loving wife of 66 years, Betty Hilton Bell; two sons, Ricky and Robert Bell; two daughters, Jannifer Bambrough and Rita Gaylene Cabales; two sisters, Marylee Ramsey and Oleta Noble; nine grandsons and fourteen great-grandchildren; and a special niece, Theresa Martin.
Visiting hours are 6-8 p.m. Wednesday, February 19 at Searcy-McEuen Funeral Home. Funeral services are 2:00 p.m. Thursday in the Searcy-McEuen Funeral Home Chapel. Burial will follow at Kensett Cemetery.
Share a Memory: www.SearcyMcEuenFuneralHome.com

To order memorial trees or send flowers to the family in memory of George Robert Bell, please visit our flower store.