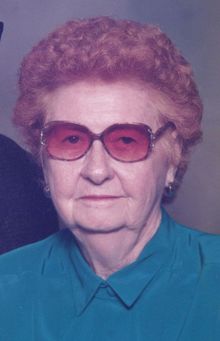 Evelyn Phillips Strayhorn, 91, of Searcy, passed from this life Sunday, January 6, 2013 at White County Medical Center. She was born November 25, 1921 in Pearson, Arkansas to the late Elam and Elizabeth Smith Phillips.

Mrs. Strayhorn was a member of First Baptist Church in Searcy; a Past Worthy Matron and 50 year member of the Searcy Order of Eastern Star; and an avid bowler on Searcy Bowling Leagues. She also loved the outdoors, enjoyed hunting, fishing, camping, and gardening.

She is survived by her husband of 66 years, Wilburn Strayhorn. They were married on Valentines Day, 1946. She is also survived by one brother, Wendell "Buddy" Phillips and wife Jane of Searcy; and two sister-in-laws, Dorothy Phillips of Searcy and Geneva Haley of Judsonia; as well as a host of nieces and nephews.

In addition to her parents, she was preceded in death by three brothers, Clifton, Otis, and Everett Phillips; and one sister, Thelma Phillips.

To order memorial trees or send flowers to the family in memory of Evelyn Phillips Strayhorn, please visit our flower store.