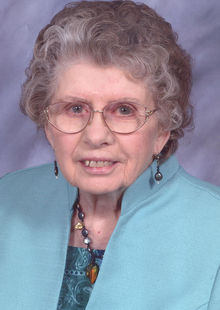 Elma M. Wilson, 89, of Searcy passed from this life on Wednesday afternoon, July 31, 2013 at White County Medical Center. She now resides with her Savior and Lord Jesus Christ, and with a host of family and friends who have preceded her.
She was born February 28, 1924 to Paul and Minnie Personett in Chelsea, Oklahoma and lived most of her youth in and around Worland, Wyoming. She is survived by two children, Henry Ray Elliott (Judy) of Red Oak, Texas, and Elizabeth M. Willson (Walt) of Searcy, Arkansas. She is also survived by grandsons, David Elliott (Barbara) of Lancaster, Texas, Keith Elliott (Sherry) of Godley, Texas, and Tim Elliott (Pam) of Melrose, Florida and one sister, Daisy Brazelton of Worland, Wyoming. She is also survived by six great grandchildren and five great-great grandchildren as well as a host of nieces and nephews, neighbors and friends met during a lifetime of faithful service to both her family and her church family wherever she lived. Included in this list are special nieces Judy Daniel, Cecilia Preston and Loma Cox who are daughters of Elmer Wilson's sister Vera who lived in Paris, Texas.
Elma was preceded in death by her husband, Henry J. Elliott who gave his life for his country in WWII and her second husband Elmer C. Wilson who also served his country in WWII. They were married 59 years at the time of Elmer's death in 2006. She was also preceded in death by her parents and a brother Herndon Personett of Dallas, Texas and one grandson, Tommy Elliott.
From her early childhood years Elma was saved and spent her entire life in dedicated service to her Lord and Savior, Jesus Christ. She spent most of her adult life involved in teaching Sunday school classes at all levels, and living her life in a manner that would reflect her love of her Savior. She was an active member of Park Ave. Baptist Church in Searcy, and was a member of the local chapter of the Order of Eastern Star.
Services for Elma will be handled by Searcy-McEuen Funeral Home, and are scheduled for 2:00 P.M. on Saturday, August 3rd, with visitation scheduled for Friday evening, August 2nd, from 6:00-8:00 P.M. at Searcy-McEuen Funeral Home. The family wishes to thank Bro. Keith Lunceford and all members of Park Ave Baptist Church for all their love and support during this difficult time, and also all of the medical personnel at WCMC and The Crossing at Riverside for their wonderful care. The family also requests that in lieu of flowers, donations to Park Ave Baptist Church Music Ministry would be welcomed.

To order memorial trees or send flowers to the family in memory of Elma M. Wilson, please visit our flower store.