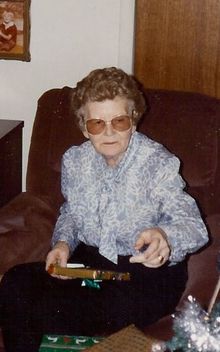 Edna Verneal Bonner Langley, 88 passed from this life on March 26th at Oakdale Nursing Home in Judsonia. She was born March 27, 1924 in Greenwood, Arkansas to the late John Elliot Hartsfield and Lora A. Hughart Hartsfield.
She was a member of Calvary Baptist Church in Judsonia. She enjoyed flowers and gardening. She was loved by all who knew her and will be greatly missed.
In addition to her parents, she was preceded in death by her first husband, Herman A. Bonner and her second husband, Harold Langley; one grandson, Brian Bonner; four brothers, and five sisters.
She is survived by two sons; Robert Bonner and wife Carol, Billy Bonner and wife Tanya of Searcy; one daughter, Jean West and husband Ray of Searcy; four grandchildren, Kevin, Chad, Bridget, and Daniel; seven great grandchildren; and two sisters.

Visitation will be Thursday from 6-8 p.m. March 28th at Searcy-McEuen Funeral Home.

To order memorial trees or send flowers to the family in memory of Edna Bonner Langley, please visit our flower store.