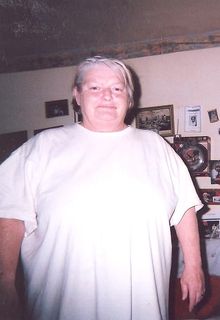 Donna Sue Osborne Hale, 60, of Searcy, passed from this life December 31, 2013. She was born July 29, 1953 in Bradford to the late Ollie and Levinuer Grady White.
In addition to her parents, she was preceded in death by a husband, Eugene Osborne; two brothers; and one sister.
She is survived by her husband George Hale of the home; two sons, Roger Crews of Glenwood and Ollie Rogers of Pangburn, Arkansas; one daughter, Stephanie LeAnn Sterns of Glenwood; two brothers, Jerry and Donald White both of Bald Knob; two sisters, Barbara Farnsworth and Vicky Quinn both of Bald Knob as well; five grandchildren and two great grandchildren as well as numerous nieces and nephews.
Visitation will be 12-2:00 p.m. Saturday, January 4, 2014 at Searcy-McEuen Funeral Home. Graveside services and interment will follow at 2:30 p.m. at Kensett Cemetery.
Share a Memory: www.SearcyMcEuenFuneralHome.com

To order memorial trees or send flowers to the family in memory of Donna Sue Osborne, Osborne, please visit our flower store.