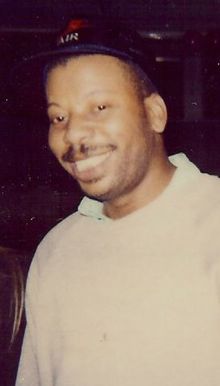 Donald Lee Davis, 56 of Searcy passed away March 29, 2014 at Searcy Health Care. He was born August 1, 1957 to the late Edward Davis and Odessa Cowan Davis.
He was a member of Christ Temple Holiness Church. He was an avid sports fan.
He is survived by two brothers, Richard Davis of Huntsville, Alabama and Carl Davis of North Little Rock, Arkansas; two sisters, Wanda Lockhart of Searcy, and Gladys Wilson (Rodney) of Providence, Rhode Island.
In addition to his parents he was preceded in death by one brother, Bruce Davis; and one sister, Meredith Davis.
Visiting hours will be held Wednesday, April 2, 2014 starting at 10:00-11:00 a.m. at Christ Temple Holiness Church in Searcy.
Funeral Services will be Wednesday, April 2, 2014 starting at 11:00 at Christ Temple Holiness Church with burial following at Oak Lawn Memorial Gardens under the direction of Searcy-McEuen Funeral Home.

To order memorial trees or send flowers to the family in memory of Donald Lee Davis, please visit our flower store.