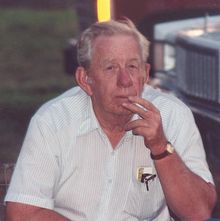 Donald Eugene Bailey, 85, of Griffithville passed away Wednesday, July 30, 2014 at his residence. He was born April 27, 1929 to the late James and Elsie Bailey.
He is survived by one brother, Aubrey Bailey of Searcy; two sisters, Gale Wilson and Dale Thatcher both of Harrison; two nieces, Melanie O'Brien and Karen Luellan both of Malvern; one stepson, Jimmy Collins of Jacksonville; and two stepdaughters, Carmon Collins and Donna Conder both of Cabot.
Visitation will be from 5-7 p.m. Saturday, August 2, 2014 at Searcy-McEuen Funeral Home. Graveside services are 2:00 p.m. Sunday, August 3, 2014 at Dogwood Cemetery in Griffithville.
All funeral arrangements have been entrusted to Searcy-McEuen Funeral Home.
Share a Memory: www.SearcyMcEuenFuneralHome.com

To order memorial trees or send flowers to the family in memory of Donald Eugene Bailey, please visit our flower store.