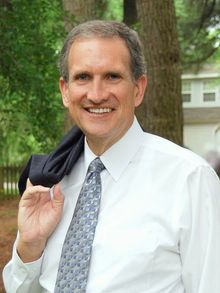 Mark grew up in Phoenix, Arizona. He earned his undergraduate degree at Harding College in Searcy, Arkansas. Mark and Barbara (Wright) married and lived for several years in Zambia, Africa, where they taught school at the Namwianga Mission.

Upon returning to the United States, Mark advanced in a career as a physician recruiter with Jackson and Coker in Phoenix, Arizona. He continued to support Namwianga as a board member on the Zambia Mission Fund. The family then returned to Searcy, where Mark worked in Alumni Relations and then as the Director of Planned Giving in Advancement at Harding University for many years.

After Barbara's death, Mark moved to China and taught at Wuhan University of Science and Technology, while at the same time teaching online classes for Harding University. He met and married Leaf and they returned to the states. Mark earned his doctorate degree in International Business and became the Roger Collins Endowed Chair in Business at York College in Nebraska.

Throughout his life, Mark cherished time spent with family, traveling around the world, meeting new people, and telling stories. Among his favorite and oft-repeated tales are stories of selling books in the rural South during college, being driven off of a cliff and surviving, dodging snakes and angry hippopotami in Zambia, meeting eccentric physicians on his many business trips, vacationing with the family, hiking the Grand Canyon, traveling the Trans-Siberian Railroad, and observations about American, sub-Saharan African, and Chinese cultures. He will be greatly missed by his family, friends, and students.

In lieu of flowers, the family requests that donations be added to the D. Mark Moore Scholarship Fund for the college education of Mark's stepdaughter, Alex Leaf Moore (formerly Qing Qing Moore). Please address your gift to:

To order memorial trees or send flowers to the family in memory of David Mark Moore, please visit our flower store.