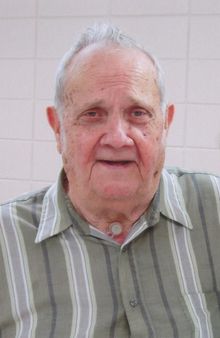 Clovis Malcolm Smithey, 88, of Searcy, passed away Saturday, April 16th at The Crossing in Searcy, Arkansas. He was born February 20, 1928 in New Albany, Mississippi, to the late Francis Smithey and Mary Lou Hall.

Clovis was a church member of the First Assembly of God. He was a United States Navy Veteran and served in World War II on the USS Paricutin. Clovis was also a former president of Arkansas Homebuilders Association.

In addition to his parents, Clovis was preceded in death by 14 siblings.

Funeral services will be held at 10:00 a.m. Tuesday, April 19th in the Searcy-McEuen Chapel with Bro. Jerry Smith officiating.

Interment will follow at Harmony Cemetery in Harmony Community.

To order memorial trees or send flowers to the family in memory of Clovis Malcolm Smithey, please visit our flower store.