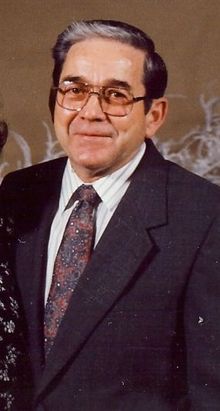 Cletus Dwain Brown, 80, of Searcy passed away Thursday, March 10, 2016 at the VA Hospital in Little Rock.
He was born January 17, 1936 in Searcy, Arkansas to the late Dempsey and Nellie (Stewart) Brown.
Cletus was a United States Army Veteran. He was a member of Airport Loop Church of Christ. Cletus was a loving husband, father, grandfather, and great grandfather and was loved by all who knew him.
Left to cherish his memory is his wife of 52 years, Vangalee Brown of Searcy; one son, Craig Brown of Searcy; two daughters, Lisa Harp of Beebe, Arkansas and Denise Lawson (Jon) of Pangburn, Arkansas; one brother, Jerrel Brown of Quitman, Arkansas; one sister, Billie Ramsey of Pangburn; three grandchildren, Jason, Tara, and Branson; and six great-great grandchildren.
In addition to his parents Cletus was preceded in death by one brother, Ray Brown; one sister, Mae Hopper; one grandson, Jacob; and one great-great grandchild.

To order memorial trees or send flowers to the family in memory of Cletus Dwain Brown, please visit our flower store.