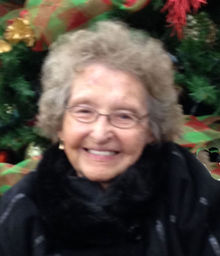 Charlene Amanda Bates, 88, of Searcy passed away Wednesday, April 23, 2014 at White County Medical Center. She was born January 18, 1926 to the late Charlie and Alberta Sisson Barnett in Gum Springs, Arkansas.
She was a born again Christian. She was an avid homemaker and loved her kids. She also loved working in her flower bed.
In addition to her parents she was preceded in death by one son, Alven Bates; three brothers and three sisters.
She is survived by one son, Charles Randall Bates of Lonoke, Arkansas; two daughters, Shirley Spradlin (Joe) of Pangburn, Arkansas, and Betty Smith (Jerry Don) of Searcy, Arkansas; five grandchildren and five great grandchildren.
Graveside services are 2:00 p.m. Friday, April 25, 2014 at Henderson Cemetery in Pangburn under the direction of Searcy-McEuen Funeral Home.
Share a Memory: www.SearcyMcEuenFuneralHome.com

To order memorial trees or send flowers to the family in memory of Charlene Amanda Bates, please visit our flower store.