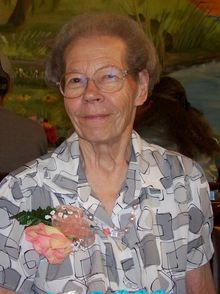 Carrie Bessie Shoffner, 85, of Searcy passed away Friday, May 6, 2016 at her home. She was born June 18, 1930 in Vandervoort, Arkansas to the late Carlos and Louvada (Faulkner) Duncan.

Carrie was a lifetime member of Trinity Baptist Church in Searcy. She dedicated her life to her family and to her work. She spent 32 years at the International Shoe Factory, and 21 years at Wal-Mart. Carrie worked right up to the day she passed. Carrie was a kind hearted individual who had a feisty side to her. She was a loving mother, grandmother, great grandmother and friend who will be dearly missed.

In addition to her parents Carrie was preceded in death by her siblings, two brothers, Marion and George Duncan; and three sisters, Minnie Lein, Lula Haynes, and Naomi Wallace.

Visitation will be from 5:00-7:00 p.m. Monday, May 9th at Searcy-McEuen Funeral Home.
Funeral services will be held at 10:00 a.m. Tuesday, May 10th at Trinity Baptist Church with burial following at Hazen Cemetery.

To order memorial trees or send flowers to the family in memory of Carrie Bessie Shoffner, please visit our flower store.