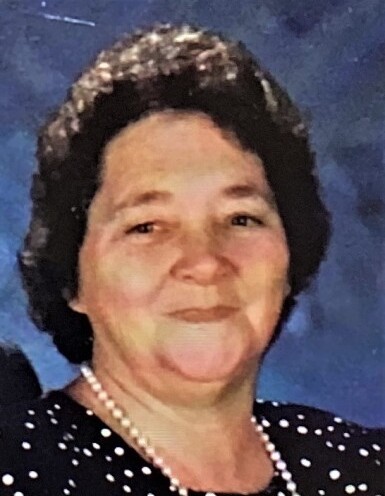 After 84 years living and giving to others, Carol Louise (Henderson) Brown arrived in Heaven to spend eternity with Jesus Christ on Sunday, November 15, 2020 at her home surrounded by loved ones.

She was born on the family farm in Highland, Missouri September 12, 1936 to John and Helen Henderson

She married Adrain Louis Brown March 5, 1955. Perryville, Missouri was their home but due to Adrain’s job with the Missouri Pacific Railroad they have lived in Missouri and Illinois, prior to settling down in Augusta, Arkansas until they relocated to Searcy in 1992.

She was a Charter Member of Our Shepherd Lutheran Church in Searcy. She passionately enjoyed tending the flowers in the prayer garden she created on the church grounds. This same garden had stepping stones she created for each Pastor the church has had. She served on the Altar Guild, and made quilts for the Lutheran World Relief mission.

She took great pleasure in tending her beautiful flowers and growing her own vegetables. She canned her harvest and shared her bounty with others. She has an extensive collection of ribbons she was awarded from entering her flowers and produce in the county fairs.  She was a 20 year member of White County Master Gardeners receiving numerous 100 Hour Club certificates for her volunteerism.

She had such a sweet spirit, a heart of gold and was the matriarch of her family; always putting God, her family, and others first as a devoted wife, mother, grandmother; as a faithful servant of God, and as a dedicated advocate towards all veterans. She was a Lifetime Member of Veterans of Foreign Wars Post #2330. She put in countless hours doing community work with the Ladies Auxiliary and capturing it in a yearly scrapbook. She held numerous leadership positions including District President in 1986. She enthusiastically helped in the Day of Caring and other community events. It was a great passion of hers to collaborate with her sisters in the auxiliary to support veterans in the community. She was also a Lifetime Member of American Legion Post #0144 in Bradford, Arkansas.

Her many talents include incredible baker, exceptional gardener, gifted oil painter, and skilled seamstress. She made her children’s clothes, Raggedy Ann dolls for her grandchildren and donated others to the Arkansas Children’s Hospital in Little Rock.

One of her favorite pastimes was playing cards. Other passions were playing Bingo and cheering on the St. Louis Cardinals. She was a diehard fan and especially enjoyed watching them play in person.

Those left to cherish her memories and follow in her legacy of loving kindness and service to others are her eight children: Two Sons, Allen (Debbie) Brown and Bryan (Tracey) Brown of Searcy, Arkansas and six daughters, Ellen (Allen) Moon of Augusta, Arkansas, Linda Ball of Jonesboro, Arkansas, Fananda (Charles) Norton of McCrory, Arkansas, Alma (Gregg) Gates of Searcy, Arkansas, Stella (Richard) Sharp of Texarkana, Texas, and Paula (David) Robinson of Clovis, New Mexico, 20 grandchildren, and 39 great -grandchildren and 1 great great grandson, her sister, Georgia Fay Blechle (late Robert)  and her brother, Neil (Gloria) Henderson both of Perryville, Missouri, and many nieces and nephews.

Preceded in death by her husband of 61 years, Adrain Brown, her parents, John and Helen Henderson, a sister, Phyllis Riney, a brother, John D. Henderson, and a great granddaughter, Aubrey Brown.

In Lieu of Flowers, contributions may be made to Our Shepherd Lutheran Church, 2610 South Main Street, Searcy, Arkansas 72143; or the Veterans of Foreign Wars National Children’s Home  3573 South Waverly Rd, Eaton Rapids, MI 48827,

Due to COVID restrictions Masks will be required and we ask that you practice social distancing.

Visitation will be held on Thursday, November 19th from 6:00-8:00 PM at Searcy McEuen Funeral Home.

To order memorial trees or send flowers to the family in memory of Carol Louise Brown, please visit our flower store.