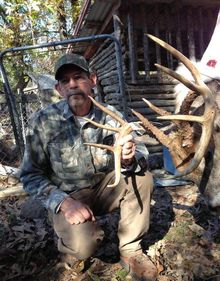 Carl Clifford, 61, of Searcy, passed away on Saturday, December 12, 2015, in the comfort of his home. Carl was born July 10, 1954 in Wheatley, Arkansas, to Willie Jane Sullivan and the late Eldon Levon Sullivan.

He is survived by his wife Peggy of 40 years; three daughters and their spouses, Mandy and Richard Taylor, Ashley and David McKnight, and Alison and Jeremy Cheely; and seven grandchildren, Abi, Autumn, Grady, and Destiny McKnight; and Alana, Walker, and Rylee Cheely, all of Searcy.

Carl is preceeded in death by his dad, Eldon Sullivan and his brothers, Alfred and Melvin Sullivan.

Carl was a carpenter by trade and a hunter at heart. He loved the outdoors, fishing, and gardening. He also had a love for animals; he always had pets.

Carl loved his family. He was known by many and loved and admired by all who knew him. In his last days, he stated that he had all he'd ever wanted. He will greatly be missed.

Graveside services will be held at 11:00 a.m. Monday, December 14th at Mt. Pisgah Cemetery.
All funeral arrangements have been entrusted to Searcy-McEuen Funeral Home.

To order memorial trees or send flowers to the family in memory of Carl Clifford Sullivan, please visit our flower store.