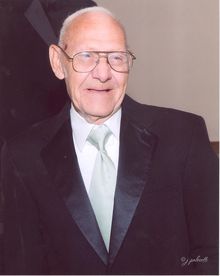 Carl Eugene Ausburn, 80, passed away Monday, January 20, 2014 at Advanced Care Hospital in Searcy. He was born January 19, 1934 to the late Arthur Eugene Ausburn and Sybal Elnora Davidson in Kensett, Arkansas.
He was a carpenter by trade who loved working with wood. He would often make crafts and other artwork from wood. He also loved to go to the Auction house. He was a loving father, grandfather, great grandfather and friend who will be greatly missed.
He is survived by one son, Timothy Paul Ausburn (Tina) of North Carolina; four daughters, Carolyn Harrington of Beebe, Bobbie Ferren of Higginson, Denise Menhinick (Paul) of Judsonia, and Jacque Richardson of Higginson; one brother, Arthur Dale Ausburn; one sister, Nina Lee House of Searcy; twelve grandchildren, Rodney, Shaun, Jennifer, Joshua, Bethany, Nathan, Corry, Stephanie, Kayli, Isaac, and Brittany; and twenty-one great grandchildren.
In addition to his parents he was preceded by his wife, Barbara Joan Ausburn; one son, Phillip Michael Ausburn; one sister, Edith Marie Smith; and one grandson, Brandon David Ausburn.

To order memorial trees or send flowers to the family in memory of Carl Eugene Ausburn, please visit our flower store.