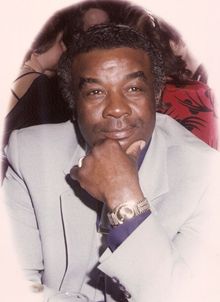 Allen Bernard Hunt, 90, of Broken Arrow, Oklahoma formally of Searcy, Arkansas passed away Saturday, March 7, 2015 at St. John's Medical Center in Tulsa.
Mr. Hunt was born December 15, 1924, in Bald Knob, Arkansas, to the late Thomas and Lela B. Hunt.
He graduated from White County Training School in Searcy. Allen served in the United States Navy for three years. His status was Seamen 1st Class.
Allen was employed with Carder Buick in Searcy for over 50 years, until he retired. He and the George Carder family had a bond that could not be broken, and until his death, they were family.
In his own quiet way spreading the message of dignity and love. He united with St. Mary C.M.E. Church in 1946, and served on the Steward Board, Trustee Board, and was a Class Leader

To order memorial trees or send flowers to the family in memory of Allen Bernard Hunt, please visit our flower store.